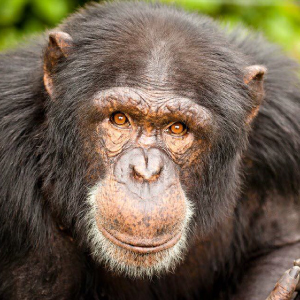 Nikki was kept as a pet and humanised in Liberia. He was totally shaved apart from having a little boys’ hairstyle, learnt to eat at the table with cutlery, wiped his mouth with a serviette, wore specifically designed chimp costumes and a gold watch, was bathed regularly and even slept in a bed. He was transferred to the Johannesburg Zoo in 1996 and lived there for 10 years (together with Abu and Amadeus).

Nikki is smaller and younger than Amadeus and is by default second in command. He has a strong bond with “big brother” Amadeus. He has bare arms and legs as he plucks his fur in these regions (possibly due to his history of being shaved). Nikki is our resident Casanova, showing particular interest in females of all species. He has an agreement with Amadeus and is allowed to mate even in front of the alpha male. Since the five females have been introduced, he has been kept occupied.