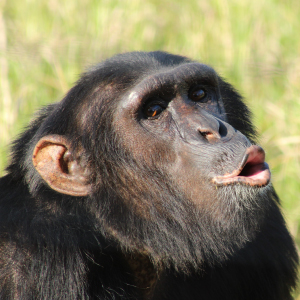 Charlie, like Nina, was confiscated from bushmeat hunters by the local authorities in South Sudan, and taken to the zoo in the town of Wau. When he was only about six months old, Charlie was passed on to a safe house in the Sudan. He was in a poor condition and had meningitis, but recovered after careful nursing. Charlie and four other infants (Thomas, Nina, Dinka and Zee) were rescued from the Sudan at the same time and quarantined together in 2007.

Charlie sometimes gives the impression of being absent minded but is more together than previously. He was previously not particularly dominant and often lost his food to others, which would result in an extended period of screaming. Adolescence has changed him and he now does not let others dominate him easily, often instigating a fight.