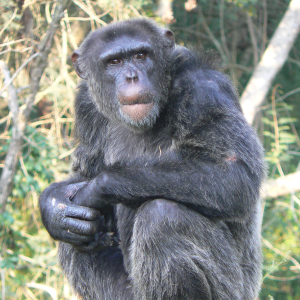 Abu was the oldest (about 4 of the first four chimps that were rescued and brought to South Africa in the 90’s. (Abu, Claudette, Amadeus and Mona Lisa/Lilly – Mona Lisa/Lilly is still at the Jhb Zoo) He was chained by the neck in a basement to a concrete pillar. He was one of the 2 chimps transferred to Chimp Eden in March 2006 just in time for the official opening of the sanctuary by Dr Jane Goodall on the 20th March 2006. He was the alpha chimp of the group now known as group 3, but towards the end, Amadeus took over as alpha in a quiet takeover. His body was found in the enclosure on the 1st August 2008 and the post-mortem showed that he had died of heart failure.

Abu was the dominant alpha male in the adult enclosure, but there appeared to be a power struggle betwee Abu and Amadeus. He had a darker face than the other two males (probably due to a West African origin) and silverish fur covering the black base colour. He died peacefully in his sleep on August 1st, 2008 due to a bad heart.