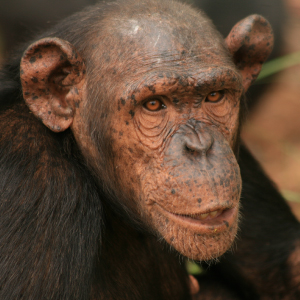 Mimi was kept in the back of a spirit factory inside a converted shipping container next to a loud diesel generator in Luanda, Angola. She was kept together with two other chimps, including Jinga. While Mimi and Jinga could be rescued in 2007, help came too late for the male who had already passed away.

Mimi is currently the alpha female of group 3. The cartilage in her ears has been broken, making them appear floppy. Mimi is generally seen foraging, feeding or at least holding something edible. She is also a bully and likes to take food away from the other females. Not the most graceful of chimpanzees, Mimi will often just drop out of a tree rather than climbing down. She has a close bond with Jinga and will pine if separated.