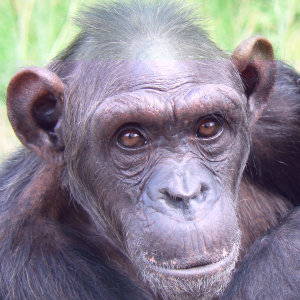 Lika was kept isolated from other chimpanzees in a cage in the back of a hardware store for about 12 years of her life. Though her owner did not abuse her in the classical sense and she had access to food and water, keeping her in solitary confinement is also a form of abuse. She arrived at the sanctuary in 2007.

Lika used to be the lowest ranking female of her group but now alternates with Claudette. When Lika was first introduced to the group, she displayed anti-social behaviour, as she had not seen another chimp for 12 years. This behaviour pattern has changed positively but she still remains subdominant to most of the other chimps. When her group members are excited, she used to take flight. However, these days she will stand her ground and receives backup from Jinga and Mimi as well as from the males.