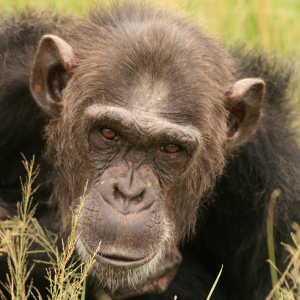 Josephine was kept in a modified shipping container in a printing factory in Luanda, Angola. She spent the first part of her life in social isolation and without sunlight. She was due to be euthanised because the premises had been sold and nobody knew how to move her. The institute was contacted and she was transferred to the sanctuary in 2007.

Josephine is the third ranking female of group 3. At first, she was nervous but has calmed down a lot and settled into the group well over the past few years. She has a very dominant personality but, due to her underdeveloped fighting abilities, usually loses fights with other females. Being extremely intelligent, she has figured out how to manipulate Nikki and he will defend her during dominance conflicts. Her piercing scream is enough to make milk curdle and she uses this to her advantage during disputes.