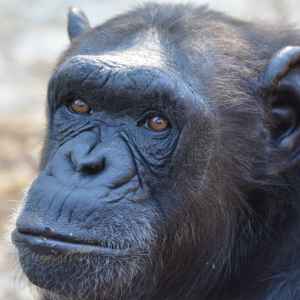 Jinga was kept in the back of a spirit factory inside a converted shipping container next to a loud diesel generator in Luanda, Angola. She was kept together with two other chimps, including Mimi. While Jinga and Mimi could be rescued in 2007, help came too late for the male who had already passed away.

At first, Jinga was mistrusting towards humans, but has relaxed a lot towards her caretakers. Although she is larger than some of the other females, she is generally friendly towards them. As she is often seen breaking up fights between others, she has the nickname “peacekeeper”. Jinga also readily shares her food with other chimps, particularly Mimi.