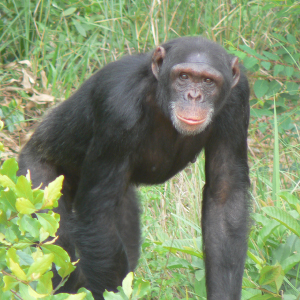 Claudette first arrived in South Africa in 1996 along with Abu, Amadeus and Nikki. She grew up with the three males in the Johannesburg Zoo and was fully integrated into the zoo group. Due to complications within the group, she isolated herself from the group and would not socialise with any of the other adults. The zoo feared she may be depressed and it was decided to move her to the sanctuary in 2008.

Since Claudette has arrived at the sanctuary, she has shown no signs of depression and socialises with all of her group members. Amadeus and Nikki recognised her straight away and were very excited to see their old friend again, making the introduction process easier. In the zoo, she was a low ranking female and she is also low ranking here though she is not bullied. Claudette and Lika take turns for the lowest ranking individual.