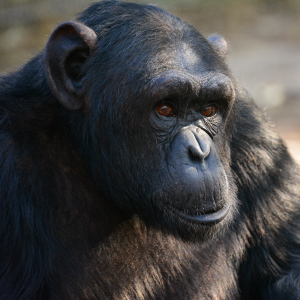 Claude was a victim of the bushmeat trade and kept as a pet. He was transferred to a zoo in CAR. His enclosure was a small cage made of cement and bars. There was no tree or grass to enrich his life. He was kept in solitary confinement for the duration of his stay. Rescuers were made aware of Claude and the institute was contacted. Claude was rescued and transferred to South Africa late in 2010.

Claude has a friendly personality and has settled into his new group well. Though he was kept in isolation most of his life, he displays good social skills and is accepted by the others. As he is a fairly large male, Claude has been able to climb quite rapidly in the hierarchy. He likes to cause chaos from time to time and is always up for a good brawl as is normal for a male chimp of his age. Claude is also quite stubborn.