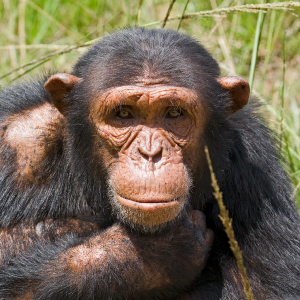 Amadeus was kept chained up outside a petrol station in Luanda, Angola to attract customers. When he arrived in South Africa in 1996, he was transferred to the Johannesburg Zoo and lived there for 10 years (together with Abu and later Nikki).

Amadeus is the alpha male of group 3. He has unusually floppy ears because the cartilage has been broken. While Abu was still alive, Amadeus was the second in command There had been a power struggle between them, during which Amadeus would assume leadership for brief periods of time. Amadeus has been the undisputed alpha male since Abu’s death in 2008 and his displays have become very impressive. Amadeus has a very strong bond with Nikki and they act like brothers.