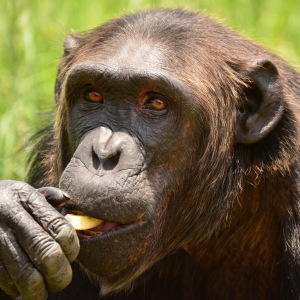 Zeena was kept as a pet in the UAE until she fell ill. She had her own room with bed and toys and was fed human food (e.g. pizza, chocolate etc). The vet advised her owner that it is illegal to keep endangered animals and that the animal is receiving the wrong nutrition. Furthermore, she had fallen into a depression because she was isolated from other chimps. The owner then paid for her entire transfer to JGI in 2006.

Zeena is often referred to as the “wild child” of the sanctuary. Since her arrival, she has never been keen on human contact but displays good social skills with other chimps. She was one of the first infants to arrive at the sanctuary and has a strong bond with Joao, Cozy and Sally. Though she can play rough at times, she has played a major role in the introduction of the other infants.