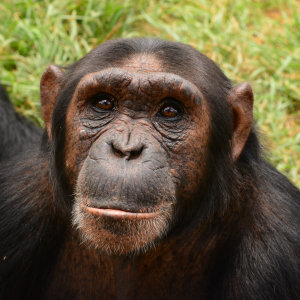 When Zee was just a few months old, she arrived in a shoebox at a safe house in South Sudan. A South African landmine removal expert had found her in a bad condition at the zoo in Wau, South Sudan. Zee and four other infants (Thomas, Nina, Charlie and Dinka) were rescued from the Sudan at the same time and quarantined together in 2007.

Zee’s name is derived from the word “Chimp-an-ZEE”. Although Zee is the youngest in her group, she has always been prepared to fight with chimps much larger than herself. She had the “baby bonus” when they were still young and was allowed to take food from both Joao and Zac. The adult males would protect her during dominance conflicts. This has resulted in Zee becoming a very dominant and powerful individual.