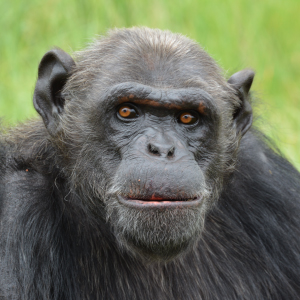 Zac was kept chained to a tree outside a nightclub in Luanda with female chimp named Guida. They were kept on short chains, which did not allow for any physical contact between the two chimps. Visitors to the club entertained themselves by giving the animals drugs and alcohol and Zac was an alcoholic when he first arrived. Both animals were in an appalling condition when rescued in 2007. Zac had lost most of his fur and was badly malnourished, weighing under 20kg. We also suspected malaria.

Zac was a very timid and gentle chimp when he first arrived at the sanctuary but has since grown into an impressive male and is now known for his temper tantrums. Zac attained alpha male position within his group about one year after introduction. Joao allowed him to take over but Zac will still turn to Joao for support during major disputes. Thomas took over the alpha reins from Zac.