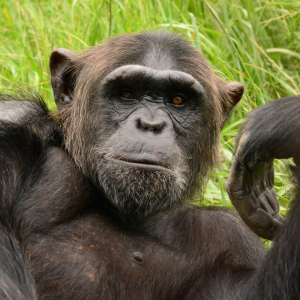 Tony was kept together with Sampa in a small cage in Luanda, Angola. The cage had no proper floor i.e. any flat space to sleep on and the key to its padlock had been lost and he had been in the cage for about three years. Tony had a cataract in one eye, abscessed teeth and his canines had been extracted, apparently because he had bitten someone. They were rescued in 2007.

Tony’s self-confidence has grown since entering group 2. He is not as attached to Sampa as he used to be and is enjoying the company of the other group members. His cataract was removed surgically and his climbing skills have improved ever since. He hero-worships Cozy and spends a lot of time with his new friend. Tony enjoys a good brawl and likes to cause disturbance between members of his group.