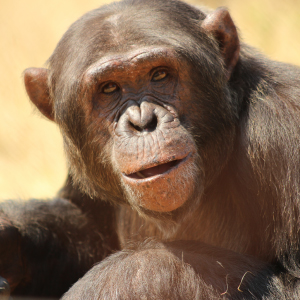 Thomas had been kept as a pet by a Major General in the South Sudanese Ministry of Environment, Wildlife and Tourism (the CITES officer). Thomas was handed over to a safe house in the Sudan, as an example of the South Sudanese government’s commitment to policing the chimp trade. Thomas and four other infants (Nina, Charlie, Dinka and Zee) were rescued from the Sudan at the same time and quarantined together in 2007.

Thomas used to act as protector of the Sudan orphans, coming to their rescue whenever they were in trouble. Once fully introduced to his new group and the large outdoor enclosure, he enjoyed his childhood. Now an adolescent, he has bulked up and is challenging the older males. Thomas has managed to dominate all of the females in the group and all the young males after this dominanted Zac, Joao and Cozy, becoming the alpha male.