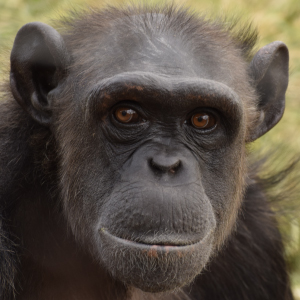 Sampa was kept together with Tony in a small cage in Luanda, Angola. The cage had no proper floor i.e. any flat space to sleep on and the key to its padlock had been lost. Sampa had been inside the cage for three to four years. It was difficult to extract her from the cage, as she would dodge her rescuers and then cling immovably to Tony. They were rescued in 2007.

Sampa is currently the alpha female of group 2. Sampa was at first very nervous and it took a few months for her to settle into group 2. She was almost a mother figure to Tony at first but is more like a big sister now. Though they still spend a lot of time together, they have both bonded with the other group members and are fully integrated into the group. Many of the younger individuals look up to Sampa for guidance. Sampa can be very stubborn at times.