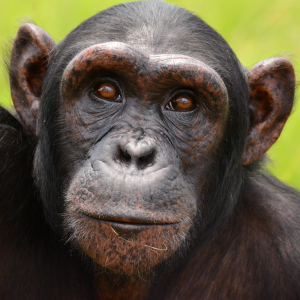 Sally was kept at a restaurant in Luanda to attract and entertain customers. Two South African ex-pats found her there and confiscated her. She stayed with friendly caretakers in Angola for another 2½ years before the documents for her legal transfer were ready and she could be transported to South Africa in 2006.

As Sally was hand-reared by humans and had received a lot of attention, she was at first very spoilt and refused to socialise with the other chimps. She never left the tall trees during the daytime and would wait for her caretakers to carry her inside at night. Once the five Sudan infants were introduced, Sally’s behaviour changed and she became more social. She now behaves like a normal chimp and is no longer dependent on human interaction, preferring her chimpanzee friends.