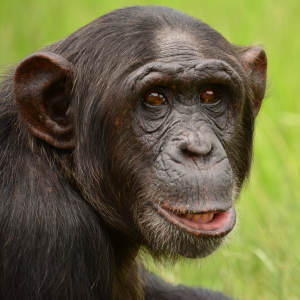 Nina was confiscated from bushmeat hunters by the local authorities in South Sudan, and taken to the zoo in the town of Wau. From there, she went to a safe house. Nina and four other infants (Thomas, Charlie, Dinka and Zee) were rescued from the Sudan at the same time and quarantined together in 2007.

Nina used to bully the other Sudan infants. After her introduction to group 2, the adult males intervened when she bullied others. This changed Nina’s behaviour and she has become a very pleasant individual. Late in 2012 it was discovered that Nina’s contraceptive implant had failed and she was pregnant! She gave birth to a healthy male, Thabu, on January 23rd 2013.