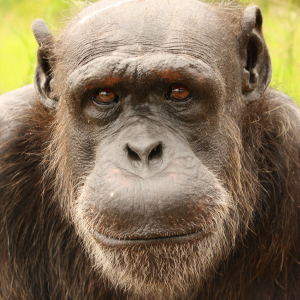 Joao and a female were circus chimps in Mozambique and were given to the Maputo Zoo when they were still young. Unfortunately, Joao’s companion died and before the zoo could arrange for another chimpanzee, the war broke out. Subsequently, Joao lived in social isolation for about 45 years. He learnt to communicate with a troop of yellow baboons in the enclosure next door. Kind people of the local community fed and looked after Joao during his stay at the zoo. He arrived at the sanctuary in 2006.

Joao used to be the alpha male of group 2 but has since retired and left Thomas to lead the group. He has grey fur and a balding head, both are signs of old age. Unusually for an adult male, he acts as a surrogate mother to the infants. He has taught them discipline and Thomas and Cozy have learnt how to rear the youngsters. Though Joao has given up his position of alpha male, he still plays an important role as Thomas's backup.