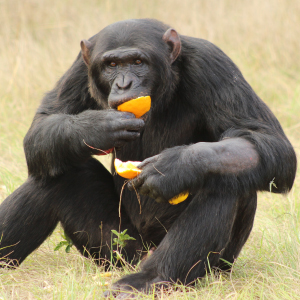 Dinka was confiscated from bushmeat hunters by the local authorities in the Juba region of South Sudan and brought to a safe house. Dinka and four other infants (Thomas, Nina, Charlie and Zee) were rescued from the Sudan at the same time and quarantined together in 2007.

Dinka is named after the famous Dinka tribe of South Sudan. When Dinka first arrived, he was unusually small for his age due to a bad diet. He has grown ever since and become a bold fellow. He will stand up for himself when bullied and is known to confront chimps much larger than himself. He rarely screams when attacked and tries to launch a counter-attack. Dinka is not fond of human contact and has a dominant personality.