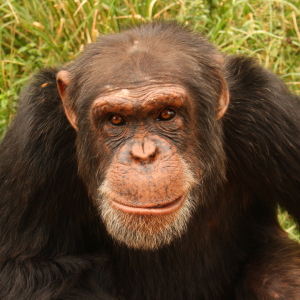 Cozy was bred in a lab in the US and was obtained by an Italian and taken to Italy, where he was forced to pose for photos and do tricks for entertainment. He was castrated and, due to repeated beatings to the head, has brain damage. After his owner past away, Cozy was kept in a caravan in a tiny cage for several years. Subsequently, he was very weak and could not walk or climb. Whereas his physical fitness has improved by almost 100%, his mental capacity will always be lower due to brain damage. He was transferred to the sanctuary in 2006

Cozy is subdominant to Thomas, Joao and Zac, mainly due to his castration. He has come a long way since his arrival and is now able to communicate successfully with the other chimps. Although he is a little different, he is a fully accepted member of group 2 and the others look up to him. Cozy has helped many of the other chimps integrate into the group when they were infants and is Tony’s hero.