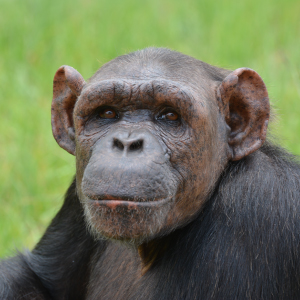 Claudine was taken in by some diamond miners in CAR when she was only a few months old. Weakened by the loss of her mother and malnutrition, her rescuers did a good job in keeping the small infant alive. They later managed to contact the institute and Claudine was rescued and taken to the sanctuary early in 2010.

Claudine has a sweet nature and adapted well to sanctuary life from the start. She is quite popular with the other chimps but due to the fact that she arrived later than the others, has a low rank within the group. Her keepers have noticed that she can be fairly stubborn and once she has put her mind to something, will not give up.