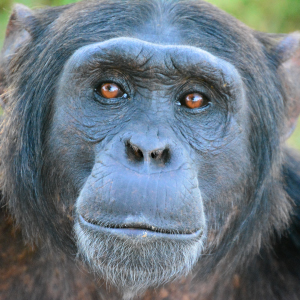 Tamu’s mother was shot by poachers in the Congo as bushmeat and Tamu was smuggled across the border into the Sudan. The Sudanese military confiscated him and he was taken to a safe house. Here he was introduced to six other infants (Marco, Mowgli, Mary, Bazia, Charlene and Azzie). They were all transferred to the sanctuary together and quarantined in 2008.

Tamu is the youngest and smallest of the group. This bit of information seems to have bypassed him completely as he charges around as though he were the alpha male. He has a lot of attitude for such a young chimp and is certainly no pushover. When bullied, he chases his opponent down until reconciliation has taken place. He has a strong bond with Charles and is backed by the alpha male during social disputes.