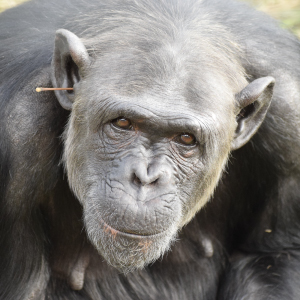 Suzie was kept as a local attraction at a restaurant on a beach in Luanda, Angola. Though the owners apparently did not abuse her, she was not protected from the tourists on the beach. She was often teased and given cigarettes and alcohol. Suzie arrived at the sanctuary in 2008.

Suzie is generally friendly and playful with her group members but can be a bully at times. Having a very maternal nature, she used to allow Tamu to ride on her back when he was still younger. Suzie also shows concern for the younger members of her group when they are ill. She has bonded with Jessica and they often play with one another. Suzie likes to place sticks into her ear as a cutip and can often be seen walking around like this.