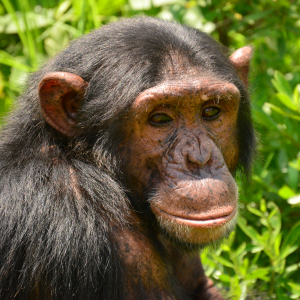 Mowgli’s mother was shot by poachers in the Congo as bushmeat and Mowgli was smuggled across the border into the Sudan. The Sudanese military confiscated him and he was taken to a safe house. Here he was introduced to six other infants (Marco, Mary, Bazia, Charlene, Azzie and Tamu). They were all transferred to the sanctuary together and quarantined in 2008.

Mowgli was very weak when he arrived at the safe house and was quite timid. He was very close to Marco when they were first introduced to the group and would whimper for Marco when in trouble rather than sort it out himself. Mowgli has since regained his self-confidence and has turned into somewhat of a terrorist. Though he respects the older males Charles and Marco, he often gives the females a hard time. In 2012, Mowgli fractured his right femur. After a complex operation in Nelspruit, his leg has healed fully.