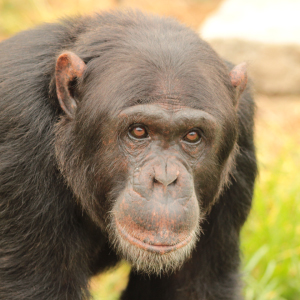 Marco’s mother was shot by poachers in the Congo as bushmeat and Marco was smuggled across the border into the Sudan. The Sudanese military confiscated him and he was taken to a safe house. Here he was introduced to six other infants (Mowgli, Mary, Bazia, Charlene, Azzie and Tamu). They were all transferred to the sanctuary together and quarantined in 2008.

Marco is a very dominant young male. Although he instantly accepted Charles as the dominant male and does not challenge him, he is trying to dominate all of the females. He has already successfully dominated the younger females and is now trying his luck with the adults. Due to Martha’s timid personality, he is often successful at chasing her away. With Jessica it is a different story, especially as she has Charles to back her up.