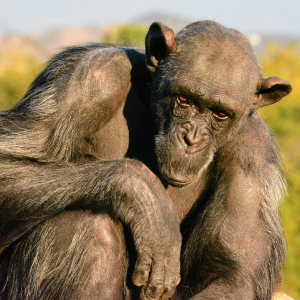 Jessica was kept in a South African circus along with Charles. When she became too large and dangerous to handle, she was locked in a small cage in a dark room. She stayed here for several years. During this time, she appears to have been severely physically abused. When Jessica arrived, she was in a very bad state. She had plucked a lot of her fur and was basically starving when she arrived in 2009.

Though Jessica had a hard life she recovered from her trauma relatively quickly. Her social behaviour is good and she has become the alpha female and a surrogate to the infants of her group. She is playful but will discipline the youngsters when necessary. Jessica has a very dominant personality and does not like to be dominated by the other chimps. Due to their past, she has a close bond to Charles.