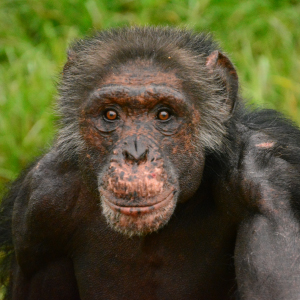 Charles was kept in a South African circus along with Jessica. When he became too large and dangerous to handle, he was locked in a small cage in a dark room. He stayed in solitary confinement for several years. During this time, he appears to have been severely physically abused. When Charles arrived, he was mentally in a very bad state and was also badly malnourished. He had plucked a lot of his fur, especially around his face and arms. Charles was a very depressed animal, who did not trust humans, when he arrived at the sanctuary in 2009.

Since his arrival at the sanctuary, Charles has snapped out of his depression and now eats very well. As they have known one another for many years, Charles and Jessica have a close bond. Charles shows very good social behaviour and is gentle but assertive with the infants.