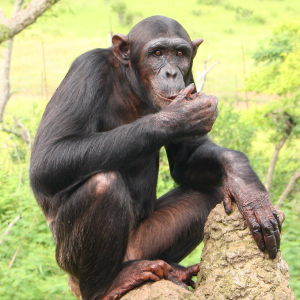 Bazia’s mother was shot by poachers in the Congo as bushmeat and Bazia was smuggled across the border into the Sudan. The Sudanese military confiscated her and she was taken to a safe house. Here she was introduced to six other infants (Marco, Mowgli, Mary, Charlene, Azzie and Tamu). They were all transferred to the sanctuary together and quarantined in 2008.

Bazia does not have a lot of self-confidence and used to often cling on to Mary for reassurance. She has improved since being introduced to the outside enclosure and will now also look for reassurance from Charles and Jessica. Bazia is very playful and enjoys climbing in the trees with the other chimps. She has turned into an independent individual as she has grown older.