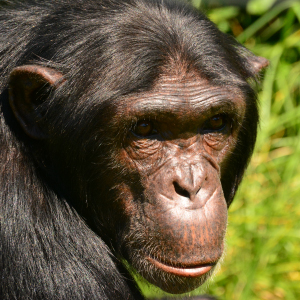 Azzie’s mother was shot by poachers in the Congo as bushmeat and Azzie was smuggled across the border into the Sudan. The Sudanese military confiscated her and she was taken to a safe house. Here she was introduced to six other infants (Marco, Mowgli, Mary, Bazia, Charlene and Tamu). They were all transferred to the sanctuary together and quarantined in 2008.

Azzie is a self-assured and independent chimp. Though one of the youngest of the group, she is quite capable of making her own decisions and standing up for herself when bullied. Her tool using skills were advanced from an early age. She enjoys being groomed and often chooses alpha female Jessica as a grooming partner.